PLANNED OUTCOMES OF THE RESEARCH

Data collection and the compiling of the collections into the designed repositories are ongoing. Cultural expressions in Ovazemba and !Kung have been collected. These include folk tales, proverbs, animal tales, jokes and other cultural expressions. It was recorded by the research project assistants, who then transcribed, downloaded and verified it into notebooks allocated for this purpose. The soft copies have been downloaded into a hard drive for safe keeping and as a backup as well as added to the metadata and will be uploaded on the server at the NUST library. The Project team was assisted by 5 young !Kung speakers  of which only two knew the orthography of  the !Kung Language. This proved to be a challenge because all the transcriptions had to be done by the two men who knew the language. This limitation will be addressed during the final project year. Above: An example of one of the !Kung stories that were transcribed and translated into English. Above: Example of an Ovazemba story that was recorded and transcribed.  English translations are also provided in the books. 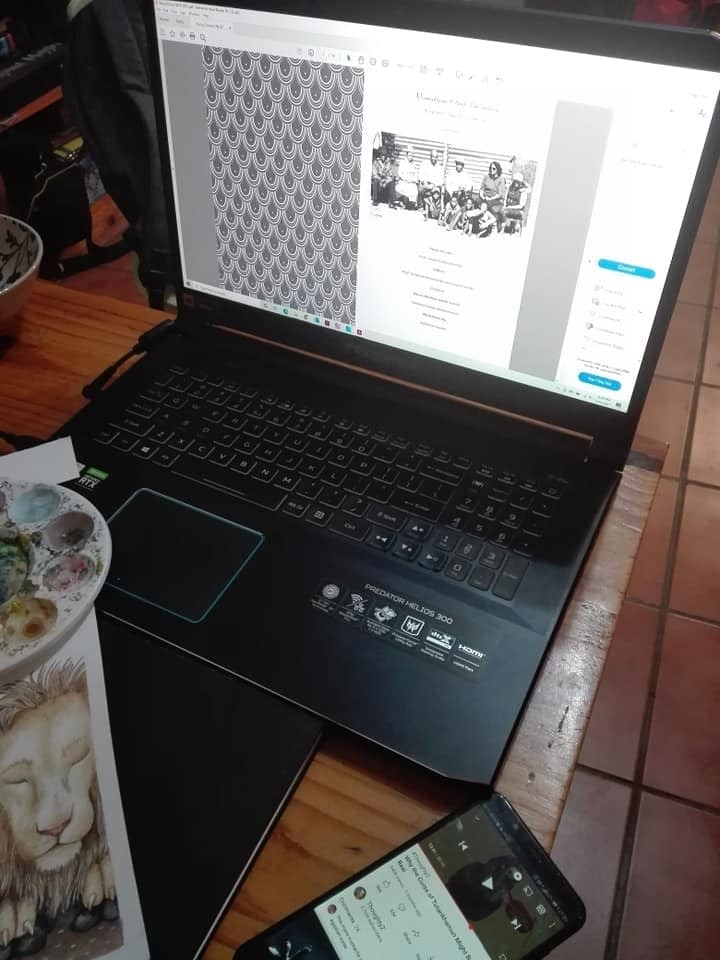 Above: Katherine, the graphic designer and illustrator for the project, is preparing some of the art work for the books. Here she is also doing the layout and typesetting of the books. Below: The NUST newspaper also featured information about the project. 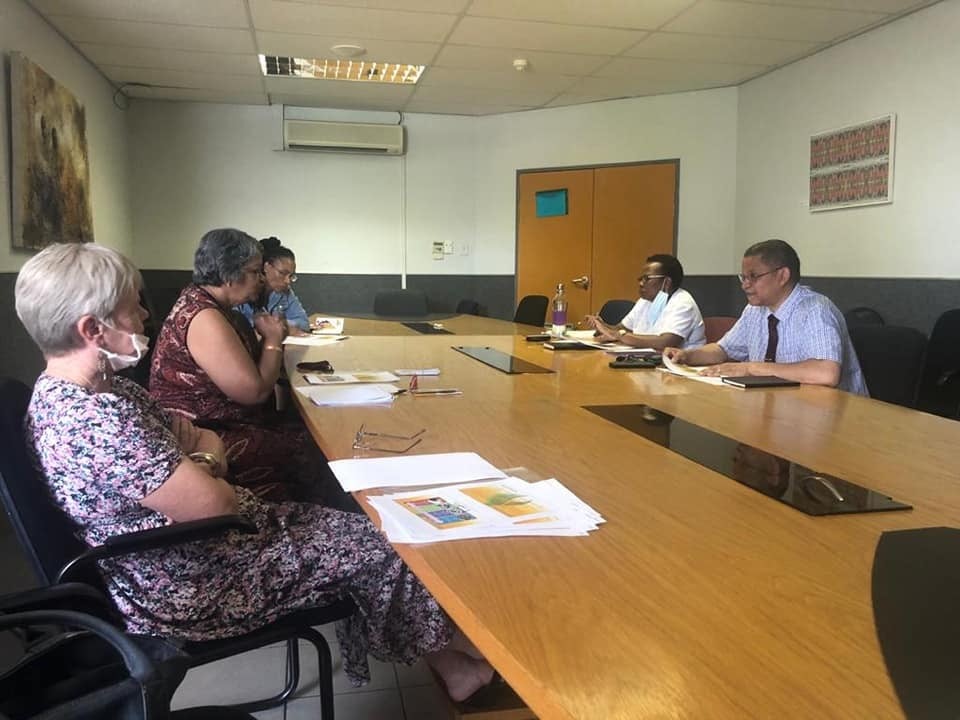 Members of the research team visit Mr de Vries at the Ministry of Education. Above: The facebook page of P3ICL contains photos and information about the research project. Outcome 3. – “Positive change of knowledge & attitude of the Oluzemba, San and Sifwe people towards their indigenous culture and language”

The production of books and content for social pages is on-going and it is planned that the first book of illustrations will be finalised by the first half of 2020. 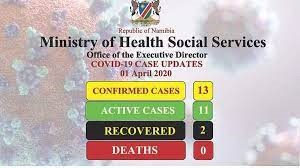 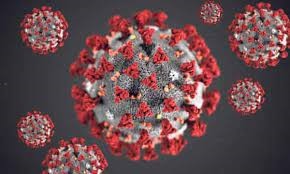 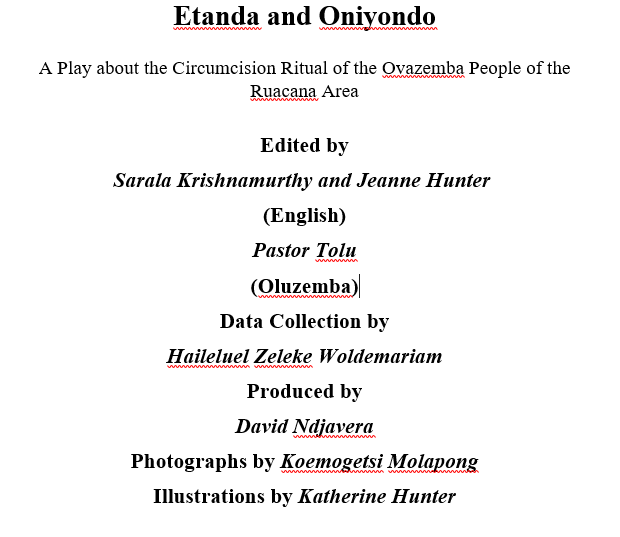 Above: A play was published about the Ovazemba circumcision ritual.

Outcome 5. – “Indigenous culture and language are an integral part of the developmental agenda of the government”

The production of books, publications and policy documents will take place during year three after the collation of data from the indigenous groups. With the presence of government institutions, such as representatives from the Ministry of Education, Ministry of Youth and Cultural Affairs, Namibian Archives, UNESCO, Cultural Heritage Council and the Namibian Scientific Society on the P3ICL Technical Advisory Committee, the Project is at an advantage with regard to awareness raising, endorsement of Project activities at a national level, and potential influence at policy level. The presence of the TAC members creates greater awareness of the project as well as makes provision for strategic technical advice beneficial to the project. Linkages have been made with NIED, the above-mentioned Ministries and UNESCO for advocacy purposes. Two Technical Advisory Committee meetings were held to appraise the TAC members about the work that we have undertaken. The TAC members are from the various ministries, UNESCO, NWG, Museums’ Association, etc. We have also paid two visits to NIED to inform the director and the subject language specialists about the data being collected. It is planned to host a conference whereby members from the local communities will be brought in to attend, and a travelling exhibition which will be taken to the regions as well towards the end of the third year of the project. The team is constantly paying attention to the communication and visibility of the project and have been posting regular news updates on social media, the NUST Tech (NUST online newspaper) and the local media. 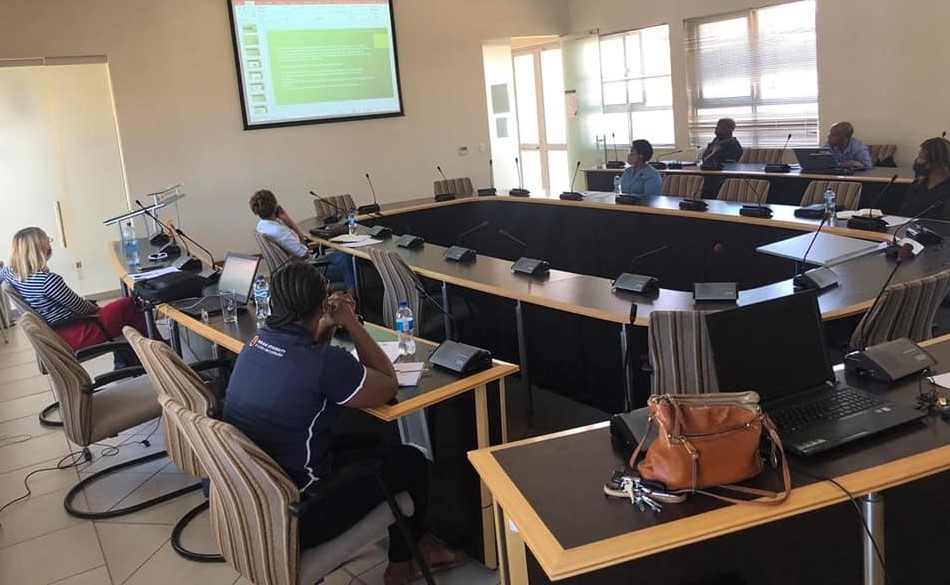 Data collection was done in Ruacana, Corridors 17, 18 and Aranos.  The two selected languages were Ovazemba and !Kung, due to these being most endangered according to the interviewed traditional authorities and local community members.

The main challenge faced in the beginning of the project, to collect good quality data, was overcome this year. Although the first visit to Okalongo was very positive and the team was very well received by the Oshimbadja people, the quality of data collected was not up to standard and could hardly be used for research. Furthermore, the team realised that Oshimbadja was a dialect of the Oshiwambo group of languages and as such shared many features with the Kwanyama language. Therefore it could not be considered endangered.

Large amounts of data was collected from the Ovazemba and !Kung people. Not only were the community members cooperative, the data collectors were also very professional and well versed. They not only recorded stories, but also transcribed and translated all the stories in Oluzemba and !Kung. The team is assured that there is sufficient material collected to date to compile books, illustrations and publications as planned. Data collection among the Zemba. 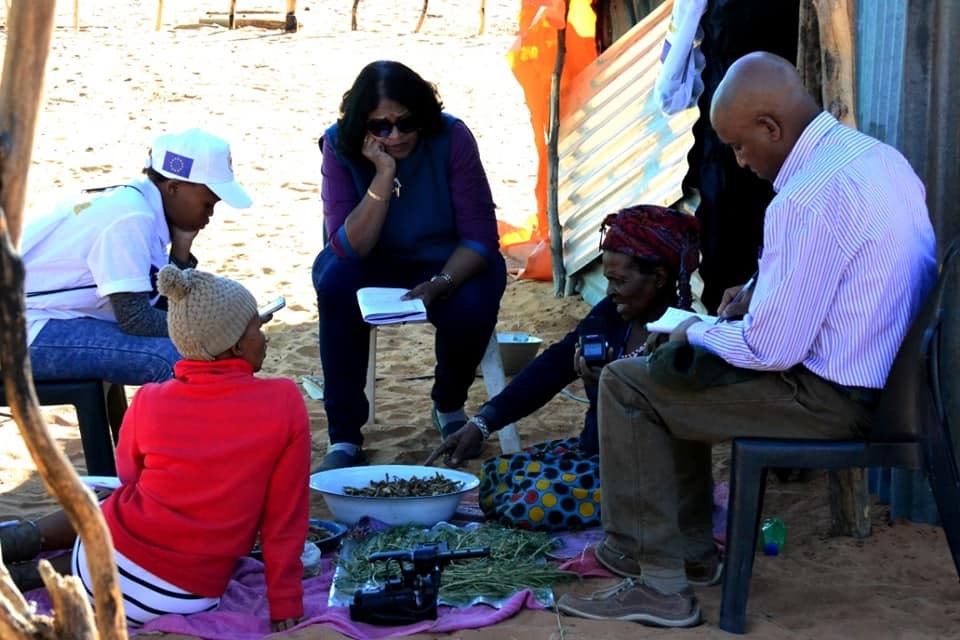 Data collection among the !Kung.

The design of the repository is on track and data is being cleaned as it is received so that it can be uploaded onto a digital repository. An online and hard copy metadata form for some of the collections has been created, populated and uploaded onto the server. The process to compress, edit and package the data is complex but the first information should be available by the second half of 2020. The complexity is due to the variable formats of the data, i.e. audio, video and written material. Further, within the written material there are also varied forms of cultural expressions, such as jokes, proverbs, idioms, stories, folk tales, animal tales and legends which all need to be edited and translated into the most usable format. The team is identifying the most appropriate format as the data is collected. The P3ICL data is stored on the Ounongo digital repository facility at the NUST Library.

Year three of the Project is earmarked for this activity.  The team has already sourced reputable authors, graphic designers, play writers, and indigenous language experts. Specific skills requirements and experience were identified within the Namibian market. The availability of such experts are limited and as such the experts were headhunted by matching the defined skills. These identified experts include, Keamogetsi Molapong and David Ndjavera. 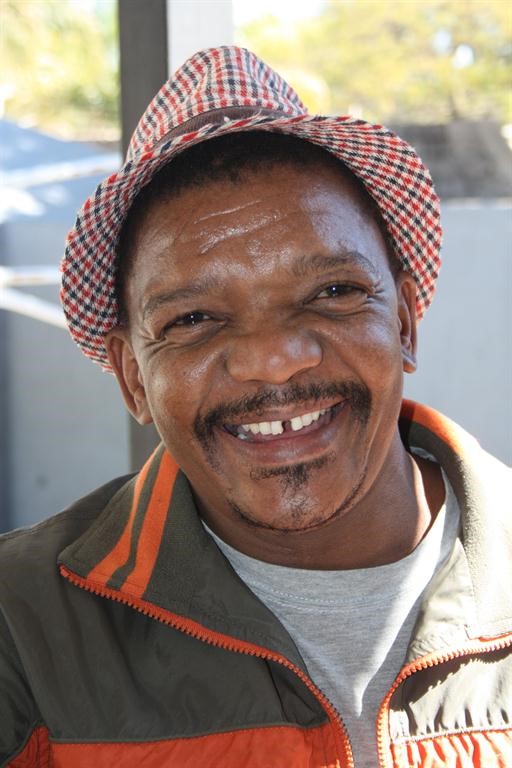 Cultural awareness raising is an iterative process. The promotion of cultural awareness amongst the NUST and general communities is ongoing via radio interviews on NUST FM, updates on social media and the dedicated P3ICL facebook page as well as the traditional Etanda-Oniyondo play  that was aired (and video recorded) during the NUST cultural festival in August 2019. The cultural event thus serves as a major awareness raising platform for the project. The play was enjoyed by all the students and staff who watched it. It was duly recorded. NUST students had the opportunity to participate in a P3ICL competition on facebook. 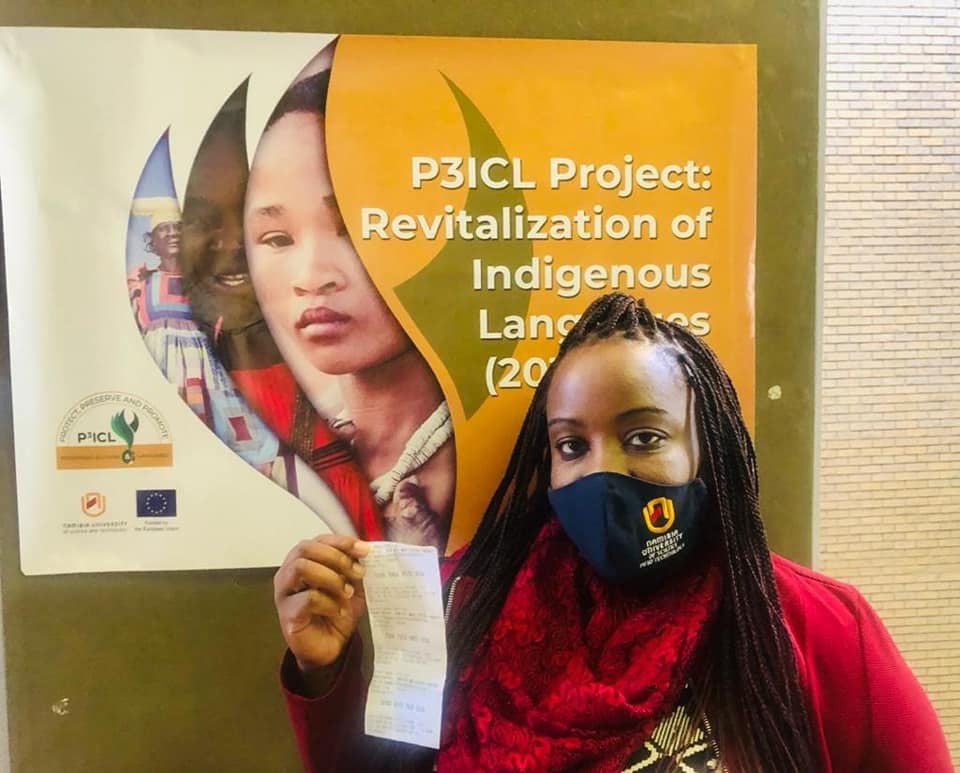 The winners of the first two facebook competitions were Lucy Paulus and Keshia Damases.

The project team travelled to Ruacana again in November 2019 to share this video recording with the Ovazemba people. There were more than 85 people who attended the screening and this was a highlight as it was the first time ever that a movie has been made in the Ovazemba language. All the members of the community were invited to comment on the movie and there were lively discussions about the ceremony and how it was presented. The women particularly had many comments to make about the circumcision ceremony. Briefly, the following were the comments made by the elders: the language spoken by the actors was not the "deep" Ovazemba because it had many expressions which were from an urban setting; the chronology of the Etanda Oniyondo ceremony had not been followed correctly; even though the ritual in and of itself was well done, it seemed to have been done in a hurry which is not a tradition among the Ovazemba people; and lastly the actual traditional ceremonies are more elaborate than were shown in the play. It must be noted that while most of the comments were valid, for purposes of dramatisation, certain liberties are taken by the playwright to make the ritual interesting for the stage. It was challenging to create a perfect depiction of the ceremonies which in actuality span several days and this is the nature of a dramatic form, which captures the essence and spirit of the ceremonies rather than adhering closely to what happens in villages. 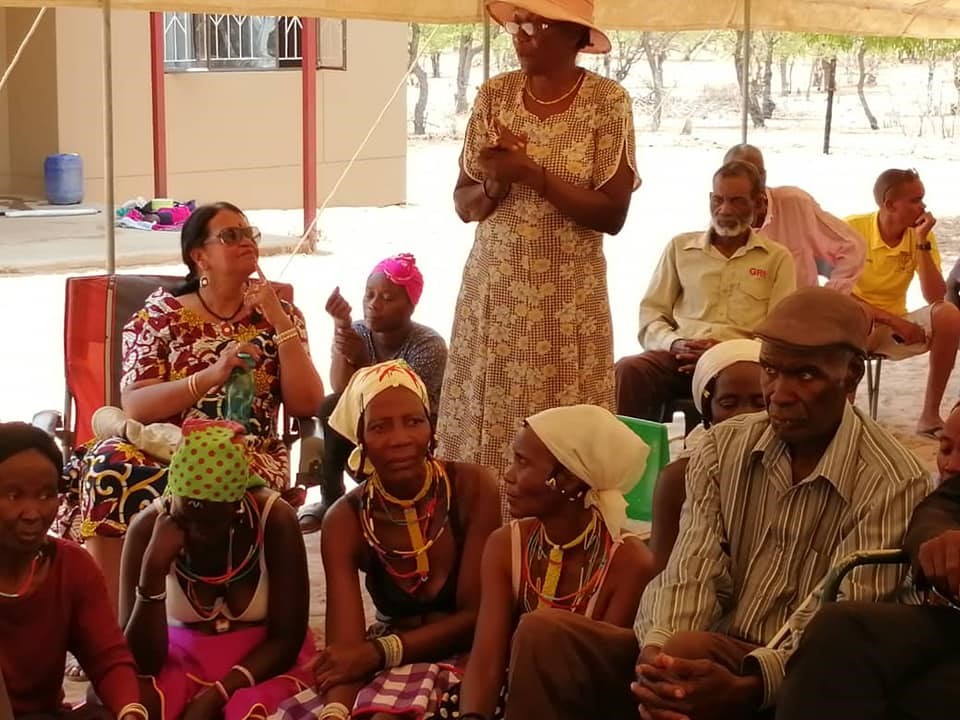 The screening of the Etanda Oniyondo play was attended by 85 people and resulted in lively discussions. !Kung children with Prof. Woldemarian during the data collection process in the Gobabis district.

One Technical Advisory Committee meeting took place during November, 2019. This meeting was very well attended and the P3ICL team were congratulated for having achieved their targets.  Full support was offered to the Project team to ensure that deliverables and the needs of the most vulnerable are met.

The vast distances to be travelled in the regions remains a challenge as it takes a lot of travelling time which results in less time to collect data. To address this challenge, the team has solicited support from the local community members and teachers to assist with the collection of information and cultural expressions, which also contributes to ownership of project results and sustainability thereof.  These members are well known in the communities and committed to produce outcomes, which is a great outcome of the project thus far, to ensure project results are not necessarily influenced externally.

Corridors 17 and 18 were quite challenging in terms of travelling and access.  The team had to stay at Gobabis and drive nearly 250 kilometres every day mostly on gravel roads to meet the !Kung people. The team also discovered, when arriving at Aminuis, that most !Kung community members had moved. The team then travelled to Aranos where fortunately they met some !Kung people who were willing to share information. During one of the days, the tyre of our vehicle was completely ripped and we narrowly escaped a major accident. The support of the EU in this instance is greatly acknowledged and appreciated. 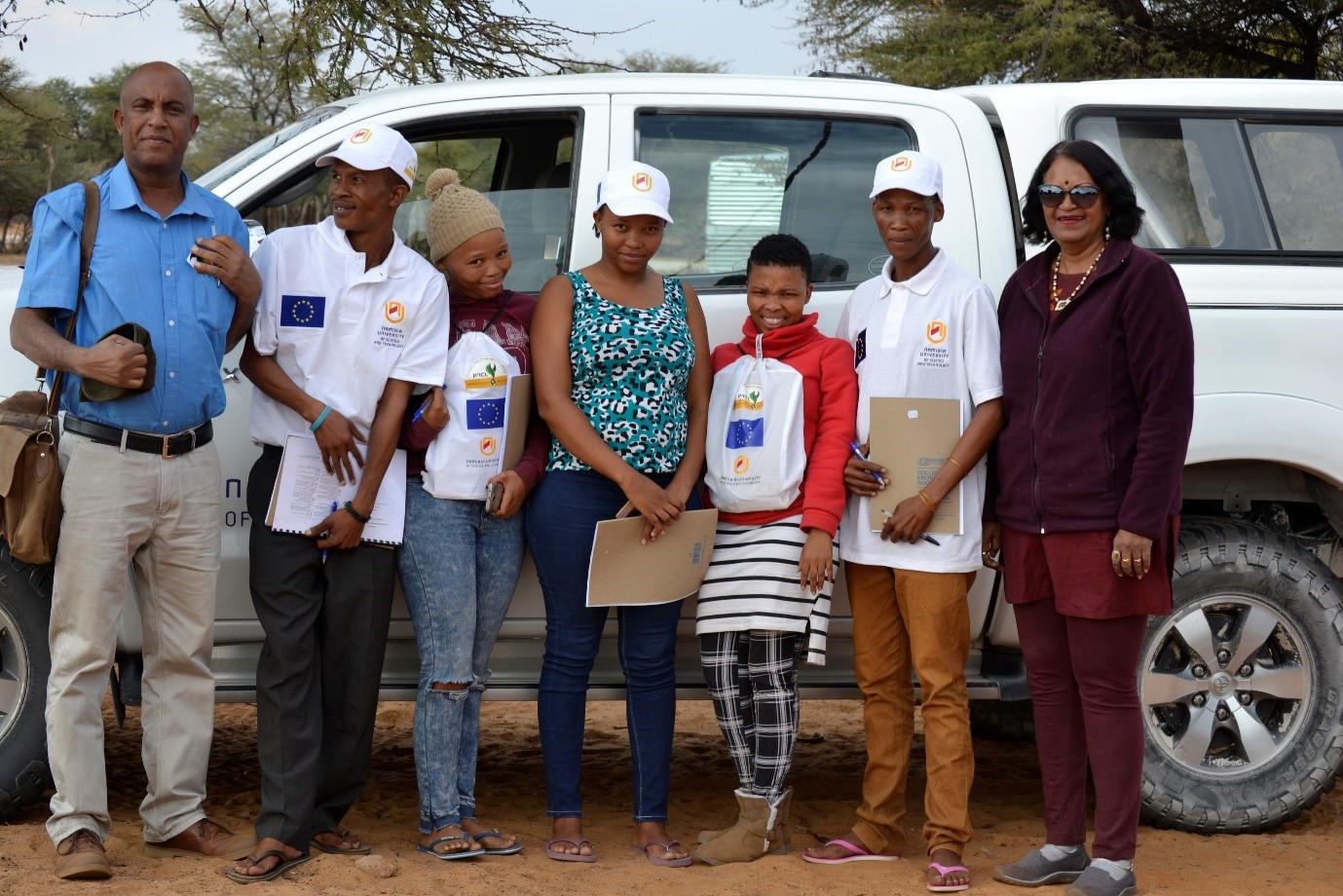 The research team and the !Kung ata collectors had to travel long distances every day to reach the !Kung-speaking communities.

The project has stumbled on interesting outcomes, such that the Ovazemba claim that they belong to the Ovaherero tribe, but have been marginalised by the government who have not officially recognised them. However, the Ovazemba are very distinctive from the Ovahimbas, in that they do not cover themselves with the characteristic red ochre which is an integral part of the Ovahimba culture. Also, the jewellery and clothes that the Ovazembas wear are very distinctive and are very proud of their culture and language. 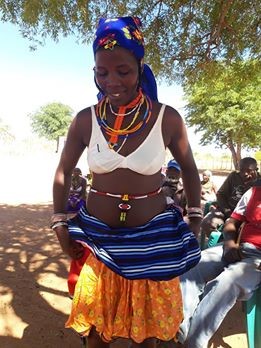 The Himba and the Zemba are different tribes, as can clearly be seen in the way that they dress.

Finally, overall, the cross-cutting gender influence on culture and language will be explicitly analysed with clear recommendations for policy intervention or with the aim of inclusion in product development.