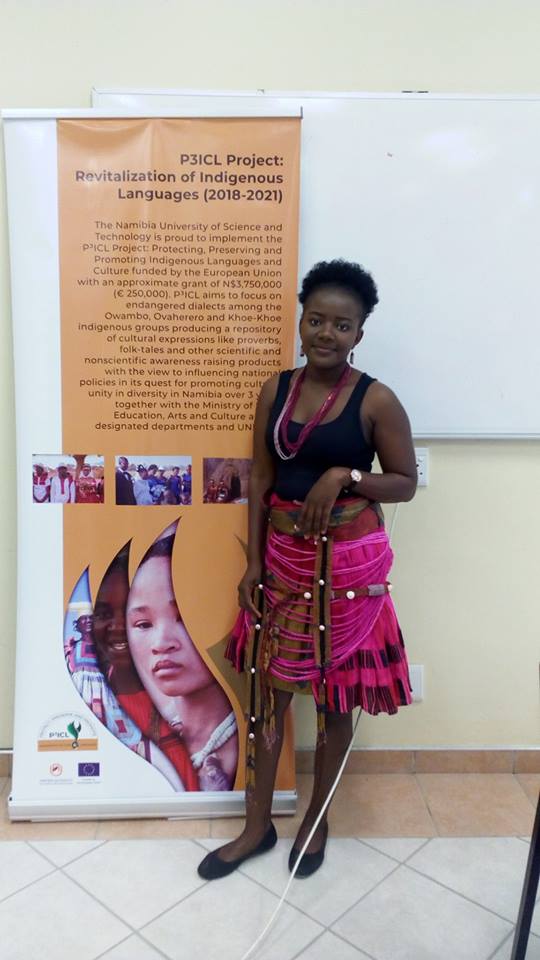 During the June 2018 recess, a research team from NUST’s Faculty of Humanities launched the European Union funded Protect, Preserve and Promote Indigenous Cultures and Languages (P3ICL) project among the Ovambadja community of Okalongo.

The team, consisting of researchers Prof. Sarala Krishnamurthy, Dr Haileleul Woldemariam and Mrs Jeanne Hunter, travelled to the Omusati region to conduct research into the endangered culture and language of the Ovambadja people.  The launch of the project took place on 29 June 2018 in the board room of the Traditional Authority, where Mr Mathias Walaula, Chief of the Okalongo Constituency, graciously offered to introduce the team to all the village headmen and women.

According to Prof. Krishnamurthy, the project leader, the launch was a tremendous success, as the Ovambadja leaders expressed great enthusiasm for the project and offered their generous support.  The team, assisted by trained student data collectors, could consequently visit various homesteads to collect data in the form of cultural expressions such as proverbs, folktales and songs, jokes, myths, riddles and superstitions from a number of elders.  As wedding traditions were of particular interest, the team was fortunate to be invited to the wedding preparations of a member of the Hangala family.

The €250,000 (N$3,9m) grant by the EU will allow similar research among the Ovahimba in Opuwo, and a San/Khoe-khoe community in order to revitalise these languages and cultures. The three-year research project is aimed at collecting intangible cultural expressions of language and information about the wedding rituals of three culturally endangered groups.  The team is also responsible for digitalising such cultural expressions, creating data for a repository, co-designing contemporary cultural products, raising cultural awareness, and advocating for the integration of these indigenous cultures under study in national policy documents and development plans.

Not only will the research team focus on making the various cultural products attractive to the target groups, but they will also make them accessible to a wider target population and all other interested parties. At the end of the project the team will organise a conference that will focus on disseminating the outcomes and lessons learnt from this project.

In the meantime, the NUST community will soon be treated to one of the first cultural products developed as a result of this research.  This will happen at the annual cultural festival in August in the form of a short skit portraying a Mbadja wedding.  NUST students can also participate in discussions and competitions offered by NUST FM, as well as follow and contribute to the research on Facebook and the P3ICL website.